David James: England and Jordan Pickford look to be in the zone

David James: England and Jordan Pickford look to be in the zone
Saturday 3 July 2021 by David James

A quarter-finalist with England in 2004, EURO2020.com columnist and former goalkeeper David James says current No1 Jordan Pickford is an increasingly reassuring presence between the posts.

I was certainly buzzing for a day or two after that win against Germany. It was almost the perfect performance from England – the game plan was executed superbly, to a man. This is a team playing as a team, not as a collection of individuals. They look to have such a good connection throughout the squad.

Gareth Southgate's selection against Germany was more defensive than many expected – considering the attacking options at his disposal – but after that performance it all made sense. Germany are a team capable of scoring goals and causing problems; England kept a clean sheet and, in many ways, controlled the game.

Jordan Pickford put in another excellent display, too. He always has a lot of scrutiny on him as the England goalkeeper, but I just didn’t see some of the mistakes people were suggesting he had made during the season.

I’m not sure what Jordan has done with his psychologist, but a lot of the work I did was about imagery. That’s all about imagining the possible scenarios you might encounter – I used to do it in my car, in the shower, sat at home or in a hotel room. You can just go through a game plan in your head – it’s a mental practice which you can go through that can save you going on to the training field for eight hours.

Self-talk is another thing. All these things are about having thought about what you’re going to do in any particular moment on the pitch. You’re still going to have to react, but you’re halfway there because you’ve already imagined it.

When you reach the peak as a goalkeeper, when you’re really in the zone, you actually don’t know what’s going on. It’s such a weird feeling – you miss all the good bits! It’s scary. I’ve played games when my perception of time went entirely because I was just so in the zone, so in the game. It’s the best place to be because all you’re doing is focusing on what’s in front of you, nothing else.

You can’t get away from the fact that this – Ukraine in Rome on Saturday – is a EURO quarter-final, but England are preparing to play one game. You go out there and play the game in front of you. The crowd, the excitement around the country, is just the backdrop to what you’ve got to do. All the euphoria can wait. Deal with the game and then enjoy what follows.

Gareth Southgate's switch to a back three is a measure of England's versatility for team reporter Simon Hart.

How it unfolded
England and Ukraine complete final eight
In his post-match reflections, Southgate explained that he had tried out the back three during England's fixtures last autumn which ensured that "the players could slot into it pretty quickly this week". Kieran Trippier, on the right, is experienced in the role both from Russia 2018 and also with Atlético de Madrid this last season, and Southgate sees his set-piece deliveries as an asset too.

As for Luke Shaw, he grew into Tuesday's game, providing more of the creativity required in the role when pushing higher in the second half as the whole team gained in confidence. And as former England right-back Micah Richards pointed out on BBC Radio 5 Live, when substitute Jack Grealish began wandering inside it gave Shaw the freedom to attack out wide – hence he was in the right place to deliver the cross for Raheem Sterling's opening goal.

Southgate's own verdict was: "We wanted to be, man-for-man, aggressive in our pressure. The wing-backs really did that well and set the tone."

A leaf out of Venables' book
EURO '96 highlights: England 4-1 Netherlands
Explaining why he wished to match up with Germany, Southgate said: "We knew the tactical problem that the wing-backs high causes you. When you've got players who are evenly matched, if you give them a tactical advantage as well then that's a real problem."

This is precisely what Southgate saw his old England manager, Terry Venables, do for England's 4-1 group-stage victory over the Netherlands at EURO '96 and again for the semi-final against Germany (the last time, incidentally, England had entered a EURO finals fixture with a back three prior to Tuesday).

A chat with former England winger Chris Waddle on the morning of Tuesday's match highlighted the sense of Southgate drawing from a lesson learned under Venables. "Gareth learned a lot from Terry," Waddle told EURO2020.com. "He's remembered things, and Terry always used to say that if you ever play a good side, match them up and it's down to the individual battles then."

Back-three history
EURO 1988 highlights: Netherlands 3-1 England
Waddle, who is commentating on England's matches for 5 Live at this EURO, was in the first England team to field a 3-5-2 at a major tournament, at the 1990 FIFA World Cup in Italy. Manager Bobby Robson switched from a 4-4-2 for a group game against the Netherlands. Robson chose that formation to avoid a repeat of the problems England had faced with two centre-backs, Tony Adams and Mark Wright, when losing 3-1 to the Netherlands of Ruud Gullit and Marco van Basten at the 1988 EURO. England would later kick off their semi-final against Germany in a three before reverting to a four later in the match.

Waddle approves of such versatility, remembering: "We always used to play 4-4-2 years ago and we never adapted to other teams who had one up front and three in midfield. We were always chasing and working harder than other teams to get the ball back."

At Italia '90, centre-back Paul Parker filled the right wing-back role despite not having played at full-back for three years. Mark Wright had played at sweeper only three times before for his club, Derby County. It helps today that players are so used to different systems.

Watch Southgate's England baby photo challenge
Southgate was delighted with the composure showed by his defenders en route to a fourth clean sheet, pointing to "a nice balance of being brave with the ball, to keep possession in our own half at times and our defenders are exceptional at that".

Whether he sticks with this system in Rome on Saturday remains to be seen – especially given the fact Ukraine made their own switch from 4-4-3 to a back three with wing-backs for their win against Sweden. Watch this space. 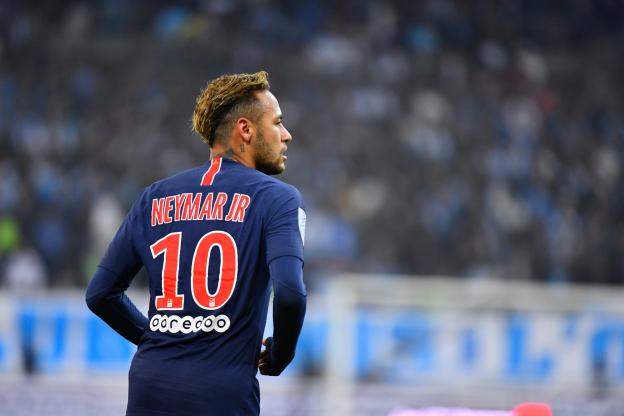 Neymar: Can we compare it to the greatest?

- Emblematic player of Paris Saint-Germain and the Brazilian selection, Neymar divides and arouses dispute. Since he put his suitcases in the French capital