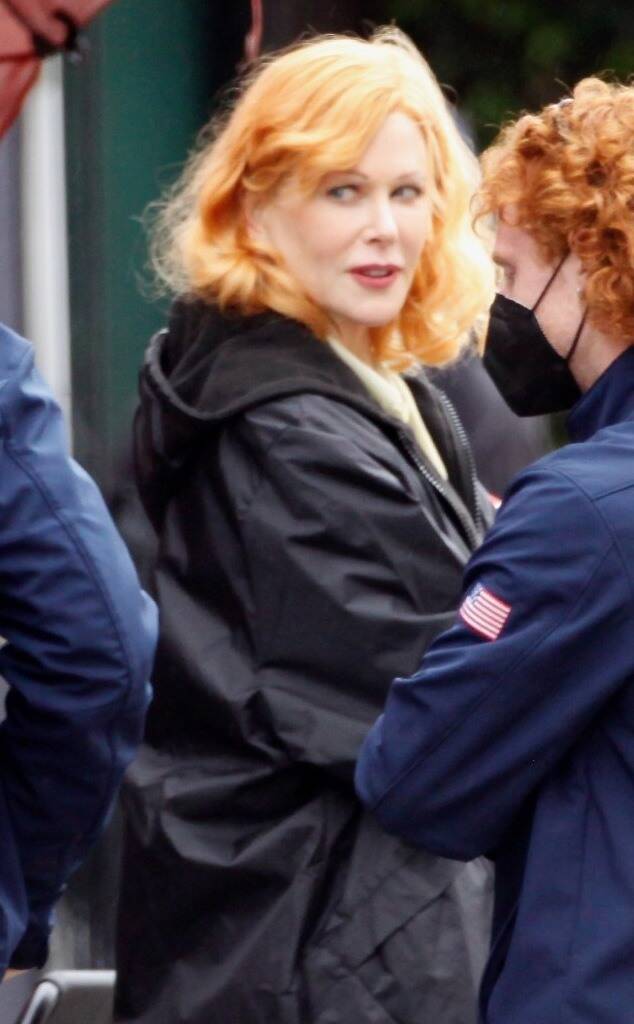 Nicole Kidman is a woman of many wigs.
This week, the actress donned a new hairstyle as she stepped into the role of Lucille Ball on the set of Aaron Sorkin's new movie, Being the Ricardos. Nicole sported a shoulder-length wig with loose curls, as well as a rosy-colored lipstick. As for her outfit, the star had on a cream-colored blazer and brown slacks, but all of this was covered by a black raincoat to protect her from the unexpected rainfall in Los Angeles.

Nicole teased her new role in an Instagram post from last week. She posed on the closed set, writing under the photo, "Currently in production #BeingTheRicardos."
Javier Bardem is portraying Nicole's onscreen husband, Cuban-American actor Desi Arnaz. The Spanish actor has yet to be seen in character, but filming has only just begun.

Javier and Nicole are joined on the set of the Amazon Studios film by Tony Hale, Alia Shawkat and Jake Lacy, as well as J.K. Simmons and Nina Arianda, who are playing the beloved couple Fred and Ethel.

Nicole Kidman, Hair
PHOTOS
Nicole Kidman's Hair Through the Years
Though there has been some criticism of the decision to cast Javier in the role of a proud Cuban-American, Lucille and Desi's daughter, Lucie Arnaz, said she and her brother, Desi Arnaz Jr., wholeheartedly approve of the cast.

Nicole Kidman, **WEB EMBARGO UNTIL 5:30 pm PDT on April 14, 2021**
GJC / BACKGRID
"My brother Desi and I signed on because this is a story of our folk's real-life passionate, tempestuous and complicated relationship and not a recreation of I Love Lucy—no one could do that," she said in a press release. "We felt exploring that relationship could be an enlightening challenge. We asked Amazon for the best and we got it with every hire. Aaron Sorkin has not told this tale as a ‘cradle to grave' biopic. Instead, he's chosen to illuminate a snippet of time during an incredibly intense period of their show's enduring success."

Lucie, who is an executive producer on the project, continued, "The casting choices have all been inspired and Desi and I are so looking forward to seeing what this impressive group of actors make of Sorkin's delicious script."

The film will highlight one week of production on the I Love Lucy set, as Lucille and Desi navigate a controversy that could end their careers and marriage.

In January, Nicole gushed about playing Lucille, telling Variety, "She's an amazing woman. I'm very excited for people to see what Aaron found out about her and the way he's interpreted Desi and Lucy and the way that it's so rich. I didn't know any of this."

- Jeweler to the stars Lorraine Schwartz revisited her path to success in an exclusive interview with E! News including the famous couple unexpectedly became